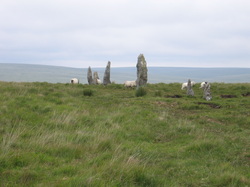 Staldon
I expect that the layout and format of this data will appear rather odd to some people. In particular,
the names of the sites are a bit idiosyncratic. I have often, but not always, used the names that
Jeremy Butler gave them in his excellent series Dartmoor Atlas of Antiquities vols I-V.

I have had a catalogue of cists on the site for some time, and then added basic information on
stone rows (the grid references given are to the higher end). I then separated out the chambered
cairns from cists, and more recently added the pages for standing stones and stone circles.

There may be some omissions from the list, and there are certainly some errors. I know this, because I keep finding them (and, in September 2011, Dave Parks pointed out a few more). In particular, I am aware that the "Sites and Monuments Record", SMR has become the "Historic Environment Records", HER, and thus has a new set of numbers. Most if not all of these are now included.

All abbreviations used may be found here.

Pages originally created by WJ Radcliffe.
This site was transferred from http://www.bill.radcliffe2.btinternet.co.uk/index.htm in October 2012.

Send any suggestions, new information etc to me at Bill.Radcliffe2@btopenworld.com.